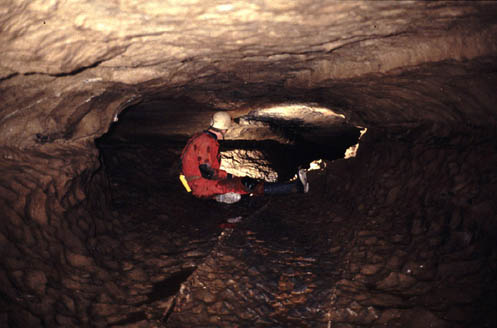 Bradwell Dale contains many small caves, but none is of any great extent. Running sub-parallel to the dale on the west side, however, is Bagshawe Cavern, a system of mature passages consisting mainly of a flood overflow route. The large stream is only briefly seen in a short stretch of streamway at the southern end of the system, close to the level of the resurgence cave in Bradwell village. The cave ends at deep sumps, but there are still some digging prospects.

A look at the map soon reveals that there is a very large cave system waiting to be found upstream of Bagshawe Cavern. The size of the stream itself suggests an extensive system, and the geography of the catchment area confirms it. In a similar manner to the Stoney Middleton and Castleton areas, there is a line of sinks along the shale margin from which water must follow the strike of the beds to the resurgence.

The farthest swallet is Dowse (or "Duce") Hole at Grindlow, 122m above the rising, and over 3.5km distant. There is a very large unexplored area in between. In addition to the route from swallet to resurgence, there must be a number of large tributaries from the west, where the limestone rises gently onto the summit of Bradwell Moor. Digs in the swallets at Grindlow and Hucklow have so far proved inconclusive. Dowse Hole was extensively dug by a number of clubs from as early as 1936 until 1991.

The Bradwell area is thus one of the best areas of future potential, probably second only to the Wormhill area. It may take years to find it, but the cave is there waiting.