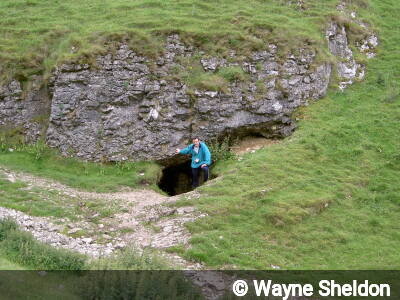 Beyond Cave #4 the dale curves left then right and ascends through a narrow section. Continuing on Cave Dale Vent is met on the right, an obvious gated entrance. Originally this entrance could hardly be seen but a smoke test from an aven in Peak Cavern's Five Arches proved there was a connection. This was enlarged by digging to ventilate the showcave. There is no access for cavers but this route has been used to access Peak Cavern during flood to rescue trapped cavers. As the flood receded this route unroofed before Halfway House in Peak.No Access (gated)