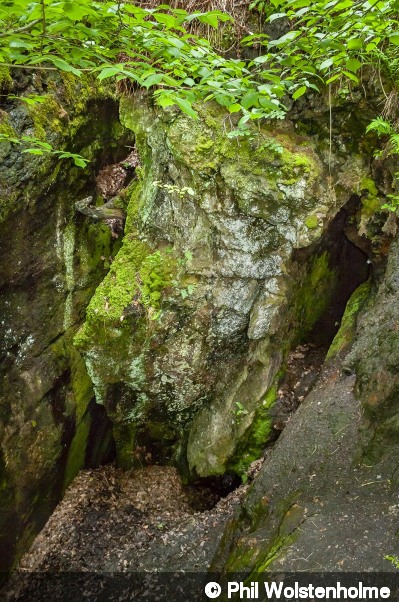 From the bus turning area at the end of the lower Mam Tor road, head west through the gate toward the large worked-out rake. On the left is the large obvious entrance to Odin Cave. The lower gorge is fenced-off by the National Trust due to rockfalls. Head up the slope to the right (north) side of the gorge and take a short path around the rim to the back corner. Rig a pull-through from the large tree above (30m rope required), to drop onto boulder platform by the entrance in the gorge. Two further resin anchors are provided to rig a pull-through down the gorge when exiting (30m rope).

Much of this old mine is fairly unstable, and the top (entrance) passages are very slippery due to the black shale mud - take great care here.

The following text mostly describes the 'trade route' P-anchored by DCA, with permission from the landowner, The National Trust. All other sections of the mine are not P-bolted and therefore not recommended at present.

Ideal and safest approach is from above the gorge on the north side, on shale, with a pull-through from large tree on north side (30m rope required) and descending into gorge - additional DMM anchor at top of limestone contact if a (riskier) single drop preferred. Entrance to the mine is via lower section of the right-hand (north) vein fissure only - the left fissure is 10m deep with a loose lip and no anchors, but access is possible inside. When exiting, 2 P-anchors on north wall allow for pull-through down the gorge (30m rope required) to safety.

Descend rift into mine, sliding down an old tree trunk. Level beyond on Little Shaft Vein has two passages on south side - the first, a crosscut, leads to left-hand entrance rift on Odin Old Vein, with a large hole in the floor on the left below the entrance rift, and which takes water in wet weather, destination uncertain. Right (west) is blocked. Second passage ends at a forefield after 10m. Just beyond the second passage junction is a large 15m-deep hole in the floor of the main passage from the 2011 collapse - rig a traverse on new DCA-installed anchors on north wall to pass this, and immediately begin a very slippery 2m climb up to an equally-slippery sloping floor to a rebelay (DCA fixed rigging in place). A 5m pitch up an awkward slot follows, to a landing on a level on a false floor heading west. Shaft in the floor after 10m (Weasel Pit) has a plank to step on, but is 20m deep and bells out, so a traverse should be rigged on south wall. A T-junction shortly afterwards has a narrow shaft in the floor on the vein, and a short crosscut on the right to the parallel Amy Gutter Vein. The main level beyond the downward shaft is totally blocked by a collapse of vein material.

Amy Gutter Vein is not P-bolted anywhere, and has a stuffy irregular passage in shale heading back east toward the entrance (ending uncertain but take a gas meter), or a short blasted passage heading west into a small stope on the vein, followed by a body-sized hole at floor-level under a stack of deads into a very sketchy flat-out crawl under muddy collapse material into further workings to the west. WARNING: Rescue would be impossible beyond this point. Beyond the crawl, a 6m throughbolt pitch lands on a junction of Slicken Drift Vein and Odin Old Vein. Eastwards from the pitch base leads for 30m to a blockage, but sleeper marks in the floor show that this was once another cartgate. High-level and very old workings under the shale can be reached by climbing up a platform, but some parts have collapsed in recent years, so great care is needed. Westwards, large passage heads into the hil for about 60m, until large-scale collapse (part-dug by TSG in early 2000s) completely blocks the way on. This is just before the NW branch into Crooked Knerl Vein. See final reference for more info.

Back at the pitch-head, a tight and rather awkward descent of 8m lands on a col with a short slope to the west leading to the head of another shaft on the vein, with a very old scaffolding frame in place that ladders used to be rigged from. This pitch is 38m deep, and leads into yet deeper and rather loose workings and has not yet been P-bolted. The slope heading east is steep and slippery, with an awkward 1m drop almost immediately - stay on the rope until this is passed. The Weasel Pit in the top level drops in through the roof here. At the base of the slope another ragged hole in the roof and a large spoil-heap on the floor result from the 2011 collapse, and great care should be taken crossing this and entering the stone-stempled passage which immediately follows. After thirty metres of stooping/crawling (avoid floor-hole on right), the passage reaches a T-junction with the main cartgate level of the mine on Odin Old Vein. Right is another stone-stempled section that leads to a backfilled conclusion with a lovely drystone arch after 15m. Left is Chippendale Rift, named after the table-leg stemples installed in the 1960s with a scaff platform at the pitch-head and a 4m bolted pitch to another slope, with a further short drop to the cartgate chamber floor at the base - handline and timber beam in place to aid the climb. A floor-hole beneath this leads into further workings lower down, not P-bolted.

After the slope, the way on intersects a small phreatic cave fragment on both sides of the passage, with water falling from another natural chamber 'Jose Hole' high above on the south wall. Climbing back up a steep slope of boulders and gravel, the cartgate roof, high above and stone-arched throughout, shows the original level before the false floor collapsed (or was stoped out). At the east end, a huge and very dangerous choke is reached, with no way on, although crawling under the first boulders gives access to a low squeeze at right into a small mineralised aven with interesting clay sculptures at the top. Just before this, climbing up to a drystone-arched crosscut in the cartgate arching (handline in place) leads for 5m to the parallel Widowers Vein. Left (west) is backfilled after 25m, and right leads for 5m to an internal shaft, 6m deep, which opens into the roof of the Bell Chamber, a further 6m deep. This is mainly natural, with very muddy pipe-workings on a wide ledge just below the shaft opening (rope up currently in place on screws (2022), but take SRT kit off before entering). On the south side of the chamber, opposite the entrance, a crawl through a hole in huge collapsed vein blocks (care) leads to a further 15m pitch on Odin Old Vein to Knowlegates Sough level, but is blocked by backfill in both directions all the way down, and there is no way on at the base.

Top of Chippendale Rift pitch, looking along the cartgate roof