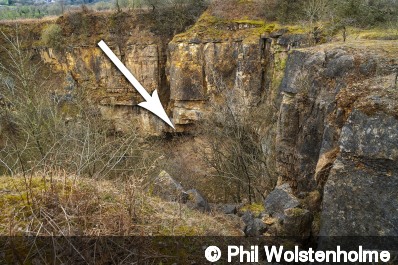 Show Cave entrance is in grounds of Heights of Abraham, close to cable car terminal. Normally no access permitted via this route. Usual entry is in large opening at the SE corner of the disused quarry on Masson hilltop, accessible from road just east of Jugholes lay-by - no access agreement in place but no known restrictions. Some entrances listed under MATLOCK DALE. Part of Masson Hill SSSI. Do not park too near the farm track junction as the farmer needs access for large vehicles, and bad relations here could jeopardise access.