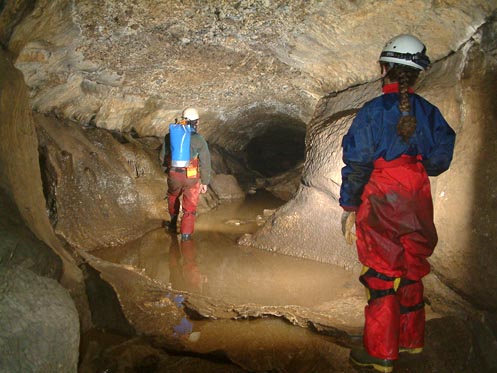 The easily accessible caves of Stoney Middleton Dale have provided many cavers with their first introduction to the sport.

The geology is ideal for the formation of an extensive cave system. A series of swallets on the shale / limestone junction to the west of Eyam take streams which must follow the strike eastwards beneath Eyam. The drainage is uncomplicated by lavas in the area, for the highest of these, the Cressbrook Dale Lava, lies well below the floor of Stoney Middleton Dale.

Four periods of downcutting have occurred in the area, and this is reflected by the four cave levels in Stoney Middleton Dale. The older caves are generally silt filled, but even some of these are penetrable for several hundred feet (ie. Ivy Green Cave).

The original risings undoubtedly lay in the floor of Stoney Middleton Dale, but the water has been captured by soughs. The Resurgence Entrance to Carlswark Cavern can still discharge a large stream in flood. Only two swallets have been penetrated for any distance (Waterfall Swallet and Hungerhill Swallet) and neither gives access to the major cave which must lie beneath.

Carlswark is the largest system. Together with Streaks Pot and parts of Merlin Mine it represents the downstream end of a system whose most distant feeder swallets lie far to the west beyond Foolow. Only a small proportion of this system is known, although many new discoveries have been made in the last thirty years.

Caves are occasionally met in the quarries on the south side of Stoney Middleton Dale. They tend to be penetrable only for short distances, but are often well decorated (ie. Sarah's Cave). The discoveries of Hangover Hole, Paracetam 'Ole, and Rubble Rift in the early 1990s began to indicate a large though possibly fragmented system on the south side of the valley.

Prospects for a large breakthrough are still good, though the digs tend to be remote (ie. the West Choke of Streaks Pot and the Dynamite Series of Carlswark Cavern). There is still a potential drop of just over 200ft (61m) from the lowest point reached in Waterfall Swallet to the Bedpan Sump of Carlswark Cavern.

Although included in the Stoney Middleton area, the drainage of Coombs Dale, to the south, is really separate. The only significant cave is Fatigue Pot, which ends at a very small passage with a tantalising draught. It is still possible that a penetrable system exists beneath Coombs Dale.