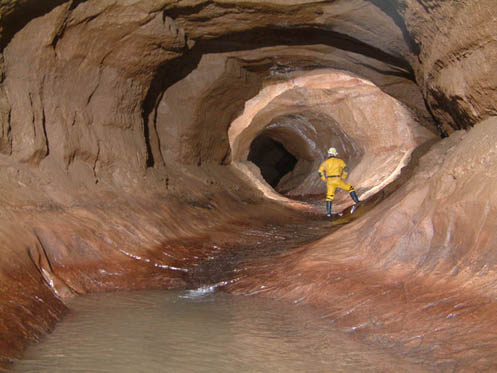 The Castleton area is the best known caving area in Derbyshire. It was first noted by Charles Leigh in 1700 that the water from the Rushup Edge Swallets was that which emerged in the Peak Cavern gorge, and Lloyd and King's survey of Eldon Hole in 1772 was one of the first detailed cave surveys to be published.

Many streams enter swallet caves on the shale / limestone junction to the west of Castleton, and all this water drains to the Peakshole Water by way of either Peak or Speedwell Cavern. Topographically, the Rushup Vale should drain down Perry Dale, Dam Dale, Monks Dale etc. to the River Wye, but the underground drainage is diverted eastwards by the underlying structure to cross the surface watershed.

Water flows eastwards, its path determined by the large east-west mineral veins, which happen to line up quite nicely with the maximum hydraulic gradient. It surfaces at the low point on the shale margin at Castleton where the reef belt is thin, and where a series of joints have provided an easy passage.

The Peak - Speedwell Cave System consists of two major stream passages, with a complex network of tributaries and high level fossil passages. Most of the swallet water flows via the Speedwell Streamway, while the Peak Streamway carries percolation water from the limestone area to the south.

Exploration of the main Speedwell route ends upstream at a very deep and spectacular sump, Main Rising. This lies at roughly the same elevation as the East Canal in Giants Hole, and there may be a very large flooded area in between. However, many of the swallet caves are still unexplored because the swallets themselves are choked with debris from the gritstone escarpment to the north, so that there may be many inlets to explore on the way.

The 1991 edition of “Caves of the Peak District” stated that “the best prospects for extensions lie in some very remote digs at the western limits of the Peak - Speedwell system”. One such dig led into the base of Titan, the biggest natural shaft in Britain. There is also potential in the excavation of some of the unexplored swallets, and possibly in digging some of the smaller dry caves and dolines which abound in the area. Exploration of the Castleton area is far from finished, and although many of the most promising sites are only available to experienced divers, the inquisitive explorer may still stumble upon interesting leads to follow.