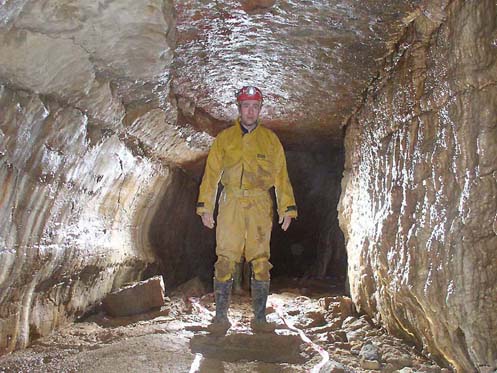 The Lathkill area has always been rather frustrating to cavers, for the most extensive caves are only accessible in drought. However, abandoned high level caves such as Water Icicle have started to yield their secrets, and suggest the existence of an extensive high level network.

Lathkill Dale drains the structural basin centred on Monyash, and the risings from Lathkill Head Cave down to Cales Dale owe their position to a saddle-like structure on the eastern rim of the basin. Lavas outcrop in the valley floor further to the east, and this would keep the drainage on the surface were it not for the soughs which capture it in dry conditions.

There are no large allogenic sinks in the Monyash area, but a few small trickles which accumulate above the lavas do sink round the edge of the outcrop.

Lathkill Head Cave and Lower Cales Dale Cave are the most extensive systems. Both discharge a large volume of water in flood, and both are flooded after a short distance in all but very dry weather. Prospects for extension are good in both cases. At the limit of Lathkill Head Cave, long considered to be unpushable, a way was found through the choke in 1990 to enter a continuation which soon needed more digging. In the same year, the length of Lower Cales Dale Cave nearly doubled, and there is still a very powerful draught at the farthest limit.

Opposite Lathkill Head Cave lies Critchlow Cave, more frequently accessible, and pushed to a draughting choke after a gruelling crawl for some 2000ft (610m), where determined pushing revealed more low passage, and another “final” choke. Critchlow Cave can also discharge a large stream in very severe floods, suggesting a connection with the main drainage system somewhere far to the west.

The only other connection with the main drainage is in the Knotlow Mine, north west of Monyash. Here the miners have intersected natural passages carrying a large stream which disappears into a very deep sump, and is thought to reappear at Lathkill Head Cave.

Careful investigation of other mines in the area, and some determined digging, may well reveal extensive (and large) vadose passages to the west of the known system. Further prospects have opened up in Water Icicle, and there is the chance of superbly decorated high level cave here.